Brand-Building | The Art of Taglines, Slogans, and Mottos… [20]

I thought it’d be interesting to zoom in on taglines, a statement that essentially captures your brand promise.

Variations on taglines, include slogans and mottos, which I won’t go into detail, but instead I’ll highlight some of the more memorable ones with high “stickiness”.

See if you can recognize some of them, including the poorly conceived ones, where you’ll simply wonder “what were they thinking?”

Good examples abound, and powerful taglines help customer create mental maps and immediate association with the brand logos, making the two inseparable. The image of Brand Logo + Tagline becomes compelling, where the tagline enhances the Brand Meaning. Notice how the role of color, shape, font, and even typeface help create a distinctive message.

This explains why some brand taglines’ longevity, while others, are infamous for their brevity, undergoing transformation and evolutions that unfortunately are not always “ON CODE”. 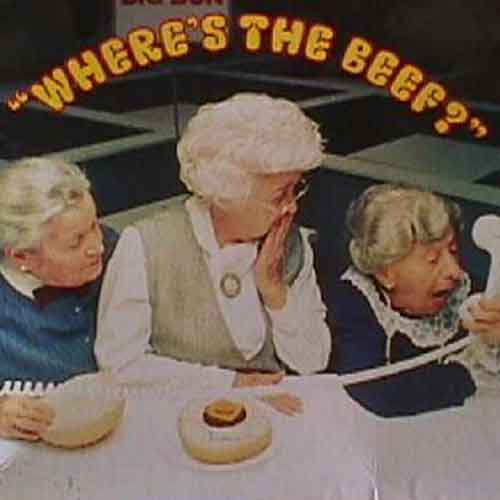 The phrase first came to public attention as a U.S. television commercial for the Wendy’s chain of hamburger restaurants in 1984. In the ad, titled “Fluffy Bun”, actress Clara Peller receives a burger with a massive bun from a fictional competitor which uses the slogan “Home of the Big Bun”. The small patty prompts Peller to angrily exclaim, “Where’s the beef?” The catch phrase was repeated in television shows, films, magazines, and other media outlets.

First airing on January 10, 1984, the original commercial featured three elderly ladies examining an exaggeratedly large hamburger bun topped with a minuscule hamburger patty. The other two ladies poked at it, exchanging bemused comments (“It certainly is a big bun. It’s a very big bun. It’s a big fluffy bun. It’s a very big fluffy bun.”) before being interrupted by Peller’s outraged, irascible demand. Sequels featured Peller yelling at a Fluffy Bun executive on his yacht over the phone and approaching fast food drive-up windows that were slammed down before she could complete the line.

The advertising campaign ended in 1985 after Peller performed in a commercial for Prego pasta sauce, saying that she “finally found” the beef.